Proform Picasso in UK from MyPaintBrush.co.uk

Good news for all UK fans of the Picasso paint brush – once again Proform Picasso is on sale and readily available in many different formats from MyPaintBrush.co.uk. 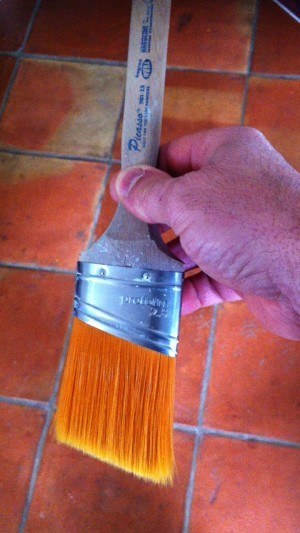 The almost famous Picasso PIC-1 “carrot top” orange synthetic bristle brush is the only angled oval brush in production. It was originally brought to our attention by Jack Pauhl’s Picasso reviews in 2010, and after relentless testing, one year on, the same story, the same observations, Picasso reviews best brush for emulsioning. Since then, it seems to have captured the imagination of many decorators in the USA and UK.

In the UK, it was a big hit with customers of the now defunct TDS. You couldn’t go on a trade forum without a Picasso being discussed. This review of Proform Picasso and Ergo on Painters Pitstop by Lee Howen is one of the most insightful opinions of the lot.

I tried, tested and purchased a few myself, the 2.5″ PIC1; I know a few decorators who loaded up; I lent a couple out to non-professional painters (builders), who couldn’t believe how easy it was to paint a straight line; I know a few DIY who were smitten with it too, amazed at how easy it was to paint compared to the usual suspect brushes at the DIY stores. And that was the sentiment, even when many were not using the Picasso at full capacity!

Sales and interest gained a lot of momentum, and with practice, a lot of rooms around the UK were being emulsioned with dead straight cuts along the ceiling line, down sides of door frames, into feature walls – and painting was being done fast!

But in the UK, as usual, yet another good thing in decorating was knocked on the head. Picasso brushes were caught up in a corporate take-over and became hard to get a hold of. I heard through the grapevine that you could acquire them for love and a lot of money from a few enterprising Brits. By and large, sales stalled, the decorators who stocked up on Picassos at closing down sale time, happily kept using them, but folks who didn’t have a lifetime supply, (me included) have been looking around wondering where the next batch is coming from. But no more waiting required!

My Paint Brush don’t muck around, and are doing it right – actually listening to what people want and meeting demand at a good price for everyone. My Paint Brush have the full Picasso range, to suit all hand sizes and preferences for angle or straight cut, as well as several style of handles.

Like all “best brushes” you have to find the correct brush for the paint in question, as there is no single brush that does everything. (All the brushes in the above link have outstanding characteristics.)

And let’s not forget, American brushes are designed for American paints, so in the UK, we have to work out what brush works best with UK sourced paint (which means niche paint from Europe & USA, as well as the paints readily available in island Britain.) Brushes have improved in leaps and bounds, leaving a lot of standard paint in the UK behind in the technology curve. It is a jungle out there!

Load it up
The 2.5″ PIC-1 angled brush works wonders, painting premium acrylic emulsion from the likes of Little Greene or Mythic. It takes a bit of getting used to, but to get the best out of it, the trick I found was to load it up, and load it up and keep loading it up, and away you go.

Clean it up
And keep your pot of Krudkutter Brush wash or Krudkutter Original handy, dunk the Picasso in there every evening to keep it nice and clean and orange.

Picasso not best in heavy paint
At one point, painters were talking in terms of the Picasso being that ultimate brush for everything. If you had no other brush, I am sure you would get a lot further with it than if you only had a Hamilton Perfection or even a Wooster Alpha, but where you have a choice of brush for each job, for each paint type, the 2.5″ orange Picasso really isn’t your best bet for instance in sticky oil based eggshell paint, or chalk paint.

The bristles are very soft, so although you can push really hard without the bristles losing their shape, the tips are not great for bossing heavy paint around, at least not as good as firmer bristled brushes. What that translates into is a great cutting in brush in oil, but not so good on big panels. Same with chalk paint, the Picasso bristles are not strong enough to be the perfect brush for spreading chalk paint over doors and panels..

Proform do a few other brushes apart from Picassos, and I have heard that the Contractor range are good in oil based paints, and the Ergo is worth getting your head and your hand around.

Picasso Pic-1 wear down
I’m sure some critics will say that the orange Picassos wear down too quickly. Yes, Picassos will wear noticeably in a matter of months of constant use. Oh well!

If you listen to the many US house painters, they rave about how much quicker they work with the Picasso, so although not ideal, the wear is not really a stumbling block to them. It makes sense for professionals to value the efficiency and quality of finish that is possible when a Picasso is in full flow. And if you are a DIY painter, this quality brush is still going to last years, if it is being used part time.

Picasso – Talk of the town
What strikes me is how the Picasso seems to become a talking point in this grey world. I don’t know about you, but when I see an orange bristle brush for the first time, I am craning for a look. And plenty of trade talk about it too. And you know if it ever hit the stores, it would generate some banter too, with the cynical old decorators trotting out some clever put downs. (Cue the smart remarks!)

Working in clients’ homes, the carrot top Picasso is a little topic to natter about too, and a chance for professionals to spread the word that there is more to decorating now than the norm.

In the meantime though, enjoy the Picasso moment. It is the best brush for a lot of painters & decorators in a lot of scenarios; it isn’t the best brush for everything, but either way, Picasso brushes are a fantastic bit of kit, and here to stay in the UK, thanks to these guys who have a real passion for the decorating trade:

If you have any thoughts or questions, check out the Picasso forum on Traditional Painter where specialist painters will no doubt be submitting their findings on that wide range of Proform brushes.

2 comments to “Proform Picasso in UK from MyPaintBrush.co.uk”