As far back as the 90’s I recall Sikkens had a mysterious product called Kodrin Spachtel. It was an oil based fine surface filler. My mentor and college lecturer had a tub of it on hand for quick filling of nail holes and dings on window cills. It worked great as a filler, but in retrospect, I don’t think it was fully appreciated just what an oil-based fine surface filler could do.

Sure, you can fill surface dings and nail holes, but it comes into its own as a surface finishing filler. You use a filling knife to skim the complete surface of a wooden door or cill with an oil-based fine surface filler, and wait 24 hours. Then wet sand with 240 grade wet n dry or dry sand with 240 grade Abranet. Vacuum the surface clean, wipe with a tack rag and apply your 2 finish coats, with a drop of conditioner added for good measure.

This process will increase the sheen level of subsequent finish paints (oil or water) by a noticeable margin. Legend has it that Toupret oil-based filler was the “secret” behind the sheeny shiny door at Number 10 Downing Street before it went metal on us.

Kodrin Spachtel is one of 4 oil-based fine surface filler products that I am aware of. 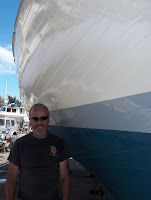 Swedish Putty is an oil-based high white filler surfacer that comes in a tube.

The sheen in this picture from 2008 isn’t bad, but I actually used traditional linseed oil based “putty” to perfect the surface prior to enamelling the mahogany planking! The Swedish Putty is much less porous, and I used it on a subsequent identical prep and paint project. It created an even harder surface for the enamel top coat.

In 2011 I was introduced to Toupret Gras a Lacquer, a French-made interior and exterior oil-based surface finisher. It comes in a 1kg tub, you pour off the yellow fluid before use. That product definitely works as a non absorbent, hard but easy-to-sand surfacer!

Colour Republic spotted another French oil-based filler from Beissier called Prestonnet GL, which appears to be a similar, if not identical product to Toupret’s Gras a Lacquer. Performance to be announced. Update. Prestonnet Gras a Lacquer was put through its paces here. Success.

So there are 4 options to add that extra zing to a front door.

I was explaining the Gras a Lacquer technique to another decorator who thought it sounded like a lot of work to fine surface fill a whole front door. With the extra sheen, the extra time and expense pales into insignificance. And anyway, how long does it really take to skim coat a door, and how long to sand baby smooth, especially with an Abranet / power sanding set-up? It is premium work, but Gras a Lacquer does not add days and days to a door. Swedish Puttying a whole boat on the other hand, that is an undertaking.

One comment to “Gras a lacquer oil based fine surface filler”