Update on Mythic paint review – primer : Mythic is no longer in UK. I have been testing Mythic here for a while, with plenty of encouragement and fantastic tech support from Mythic UK. (This was in the TDS days, sadly no more.)

Mythic is American, relatively new to USA, and very new to UK. My understanding is that the paint system was developed as a result of 9-11, where the Pentagon wanted to redecorate the renovated bombed bits without shutting down the closed air systems.

As well as very user and environment friendly, another big Mythic selling point is its durability and ability to overcome problem substrates ie you can paint any surface in any finish, and with a spectrophotometer, in any colour. So one primer for all surfaces followed by your choice of flat, satin, semi gloss or full gloss top coats, all working the same way.

Zero VOC (pollution content) all but zero odour and free of toxins and carcinogens. Good enough to drink, apparently, apart from the taste! Very eco. High tech and safe to use, they seem to have a good approach to a reliable and consistent paint system. If the primer works, the rest could be good! 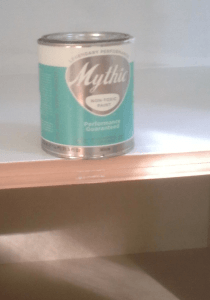 To prime bare poplar or mdf, I would tend to use oil based Zinsser Cover Stain, but honestly, Mythic primer sticks like the proverbial poo to a blanket, and edges stay intact better than CS or BIN. So good, I couldnt believe it.

The primer also raises the grain like CS and sands down glassy smooth the same, giving a solid base for top coats.

Dont get me wrong, the end result is very nice using all Mythic water based paints on new or previously painted surfaces. To be honest, it is quite hard to get a brush mark to show when painting up new timber, but I would like to slightly amend my review of the primer by saying that by adding a coat of oil or acrylic gesso in the system, or filling with Toupret gras a lacquer (Swedish Putty), I see a definite improvement in the end result.

I tested it on old lead based oil gloss, just painted some straight on and left it. After a day it could be scratched off, no different to the best high adhesion primers on the market. However, being latex, leave it a few days to cure and it survived the tape test. It sands back easily and nice and dusty. Still solid after sanding.

Knots that bled through previously painted trim were obliterated with 2 coats of Mythic. (I prefer Classidur primer as it works for me, so far, with 1 coat, but if you read the small print, 2 coats are also recommended, so if Mythic is specced comparable to the best on the market, then I can’t really criticize it.)

They have told us that it is tough on rust too, tested on the New York subway straight onto rusty stanchions and lasted 2 years, which apparently matched or beat the performance of anything they had used before. Cant verify that personally, but no reason to disbelieve it.

Compared to oil primer on timber trim, Mythic seems to offer like-for-like performance with none of the disadvantages of oil. (See slight revision above.) Mythic primer seems to be as reliable as Classidur universal primer, with the added advantage that it flows much better. It goes through a reduced pressure Sata spray gun without thinning. Can’t fault that.

I have used the Mythic eggshell and semi gloss finishes on wood, and will review those later, but again, first impressions, the top coats are really really good with brush, roller and spray – and that is from a cabinet painter who has been highly cynical about water based paints. But if they go on easily, dry fast and once cured do not come off with a piece of tape, what isn’t to like? Verdict, I’m thawing daily.

I don’t know all the ins and outs of the Mythic product range yet, but “Mythic Matt” knows his stuff.