Ron Taylor has been using water based and water-borne paints longer than most in the UK and these are further findings with Mylands Primer and Ican Primer. He has been using them on recent jobs, so it is still early days and at the observation stage, rather than endorsement stage.

This test was for priming wood before applying Eicó satin. They are both high performance hybrid primers. Ican is either the same company or satellite of Eicó paints.

These are both water-borne hybrid products (oil suspended in water) and can be used as a primer for wood and as an adhesion promoter between old and new coatings.

The benefits of hybrid over pure acrylic is faster adhesion, especially to pre painted woodwork. If you are applying tape to the finished surface this is a real plus point. 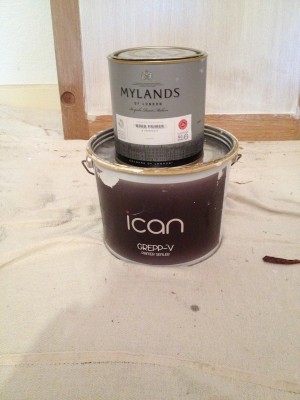 I had some bedroom cupboard doors and frames to prepare, prime and finish with Eicó satin paint. The woodwork had been finished on the outside and left bare internally. Basically an old wood veneer that had gone dark and dry. I had intended to prime with oil-based Zinsser Cover Stain, but after using this on the face of the frame, I changed my mind. The veneer was soaking up the Cover Stain fast and making application hard work.

I had both water-borne primer products on the van, as I had used them recently on jobs, applied over existing paintwork, and decided to test side by side for their priming abilities.  Both products were applied with a * Picasso PIC-6 2.5″ brush and no additives or water were used.

First up was the Ican Grepp V.

Consistency was medium to thick. This applied fairly easily with a liberal coat.

Open time, considering the substrate, was very good. I got no lap marks or banding on the panels or rails.

Opacity – I was impressed with the opacity considering the colour of the wood.

After a few doors I switched to the Mylands Wood Primer/Undercoat.

Consistency – Stirring the product up it seemed thick, but I resisted the temptation to thin it. The product seems heavy on the brush but spreads out extemely well.

Open time is good, though not quite as good as the Ican. But this isn’t really a problem if you work quickly and systematically.

Opacity – good, but not quite as good as the Ican.

I hadn’t expected either product to apply as easily as they did on the dry surface. Both applied at about the same speed and about twice as fast as the Cover Stain would have. They also applied much easier than a pure premium acrylic primer, or a cheap and cheerful acrylic primer/undercoat.

As they dried, two things were evident.

1 – Although opacity was good on both, I would give the Ican Grepp V the points

2 – As for filling the grain and penetrating the wood, the Mylands primer won hands down. In this regard it was almost oil like. I haven’t seen this type finish in any water based primer ever. Most will sit on the surface and need to be worked in, but not the Mylands. The Ican wasn’t bad, in fact, just what I would expect, but the Mylands was better. 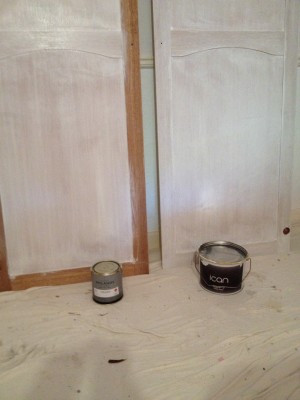 The Grepp V is quoted as being a stain killer and this proved to be the case on some marker pen numbers which were scribbled on the doors. The Grepp V coated over this well and held it back, but the marks bled through the Mylands.

When it came to painting the pre painted side of the doors I found the products to be very similar. The Mylands primer again applied easier, but the Ican had a slight edge in opacity and whiteness of finish.

Painting over the primer

Both products overcoated with themselves easily and consistently, (ie the second coat flies on!) but when it came to applying an Eicó acrylic topcoat, the Mylands performed better. The Mylands dried to the smoother surface despite looking like a flat finish. The Grepp V had a very flat, dry finish.

The topcoat I was using, Eico Satin, applied easily and smoothly on the Mylands, but there was a slight drag with the Ican product. This wasn’t a problem on skirtings and frames, but when painting door panels, you need to work very quickly with the first topcoat on the Ican to avoid dragging, because the drier surface of the primer soaks up the solvent from the topcoat.

For a high opacity easy-to-use primer to block stains and knots, the Ican Grepp V is your first choice ahead of Mylands – Mylands primer doesn’t work for this scenario.

The Ican primer was sourced at Paints and Interiors in Norfolk. There are tricks to make any paint work better, for instance, wiping the surface with a damp sponge prior to applying quick drying acrylic topcoats may well overcome the problem of the heavier suction of the Ican Grepp. Will keep you posted on how this primer fares.

For general priming / as a basecoat over old oil based paintwork, Mylands primer looks a very good bet as a solid, well formulated base for quick drying water-based topcoats. Its outstanding “filling” properties, especially, have won Ron over – where he needs the advantages of a low odour water-borne primer with the body of an oil based primer, he is all over Mylands primer now, and will be keeping us posted on how it pans out in the long term.

Ron Taylor, a specialist painter and decorator based in Kenilworth, is the Traditional Painter responsible for hand painted kitchens throughout Warwickshire.

Ron is one of the UK’s leading authorities on the specification and application of water based and waterborne paints.

One comment to “Mylands Primer and Ican Grepp V Primer”