How to decorate a damp affected wall and ceiling 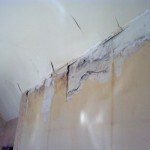 This article is about How to decorate a damp affected wall and ceiling. I first published it in 2008. Damp is still a problem in 2020!!

Problem 1 – This room had suffered from a leaky chimney breast which affected the plaster on the end wall. The damp leached onto the ceiling and over time mould had grown behind the wallpaper. The damp had also damaged sections of the lath and plaster and cracked the lining paper on the ceiling.

Problem 2 – The source of the water leak had been solved a few years earlier, so it was safe to redecorate. However, the customer did not want to redecorate the whole room, as it was in very good condition apart from the end wall. It was tricky to know where to draw the line. literally. The ceiling sweeps down and there is no defined stop-start point for the damage.

Solutions for damp ceilings and walls 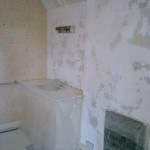 Filler and sealer – The damaged plaster was carefully cut out back to the lath. I washed the bare plaster with bleach and left it over night. Next day I rinsed every surface thoroughly. Once dried, I painted the surfaces with alkali resisting primer. ARP is an old tradesman’s go-to primer which binds any loose plaster and seals old water borne stains.

When ready I filled everything a couple of times with Polycell trade filler. As a finishing touch to the prep, I sanded and sized the walls with Beeline Primer. 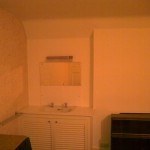 Finishing – I lined the surfaces with 1200 grade lining paper hung horizontally. The joint between the new and the old lining paper on the ceiling was primed then filled. I sanded it a couple of times until it was all but invisible. (We have since upped our game with joints!)

The ceiling and end wall were painted with a couple of coats of Dulux vinyl matt. I chose  a colour to match exactly with the background colour of the rest of the wallpaper.

To make sure I get a sharp joint where the new painted lining paper meets the existing wallpaper, I ran a bead of decorators caulk down the joint. I then stuck low tack tape on the vinyl wallpaper and painted a straight line.

Sorry about the flash, it’s these dark nights closing in! Thanks for reading about How to decorate a damp affected wall and ceiling.