Hildering Trays for paint transport – keeping a lid on it

The Hildering Trays for paint transport seem to have solved a global problem:

How to package single tins of paint so they can be couriered safely?

This article explains how.

Pro painters, DIY and paint suppliers can now dare to dream about having tins of paint delivered intact in normal sized boxes, and deal with significantly less sticky tape, bubble wrap, and static-loaded polystyrene beads with a mind of their own! 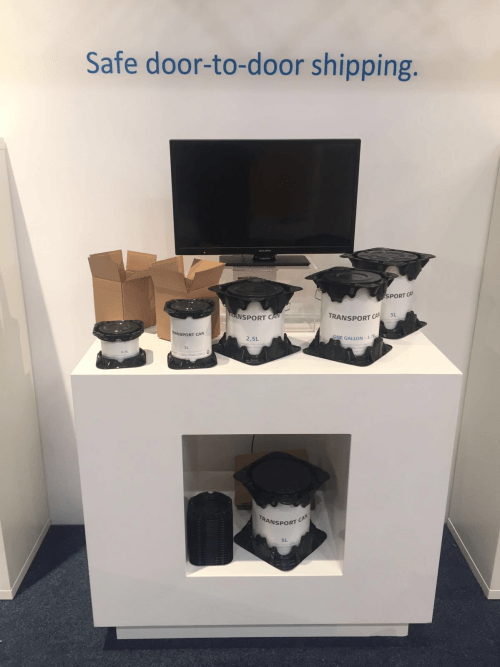 The photo shows the prototype paint transport tray on display at the recent Farbe 2016 show in Munich, the decorating trade’s largest expo.

The Hildering team were busy as ever with a constant stream of interest in their various time- and water-saving innovations, but Jop Timmers, head of innovation at Hildering, found time to explain their newest contribution to the paint industry. As usual he was very open, and didn’t dodge any hard questions!

Birth of a tray for paint transport

The starting point on this latest design journey for Jop was the obvious question – why do paint merchants need to go to such time-consuming and costly lengths packaging one or two tins of paint, just to survive the courier service?

Surely there is a simpler way to keep a lid on a tin of paint in transit, without incurring the expense (and risk) of mountains of bubble wrap and miles of tape?

a) Starting with the top disc, twist and just clip/snap it with downward pressure over the lid.

b) Snap a second disc firmly on the bottom of the paint tin.

c) Once sandwiched between the two transporter discs, the paint can is
then placed into a box the same size as the discs. d) Secure the lid of the box with a sturdy piece of tape, job done.

Good designers are pragmatists and the Hildering design team take their job and testing very seriously. With a Europe-wide reputation for reliable paint canning, they aren’t going to let a duff paint can transporter loose on the market.

You might think that if you dropped such a simply packaged paint tin with any sort of force, that it could easily dent it, or worse, pop the lid, resulting in the contents neatly splattered on the inside of the card box? Think again! 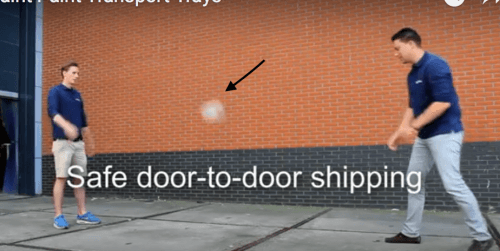 Even clumsy wannabe couriers at play can’t make a dent

Time and again, boxes have been sent anonymously by courier and received on site, the cardboard box beaten to a pulp. Ouch for the box, but the paint tin inside remains intact, no damage to the actual can.

Hildering have done their own drop tests from 1.5m high. Same result, a damaged cardboard box with the paint safe and sound inside an undamaged can.

Jop admitted he was a bit nervous about dropping a 5 litre can from height, the area where the handle is attached to the can is a weak spot… but hey, it works!

The designs are well protected, and cannot be copied, and Hildering are being sensible about the claims for the protection of paint cans in transit:

We cannot and will never guarantee a paint can that is packed in our system will not open when it is smashed on the floor or kicked around, or especially dropped several times, but it sure is a whole lot safer than putting it in a cardboard box with some flakes or bubble wrap.

Some questions about the plastic trays / discs!

At first glance, it looks a bit flimsy?

On closer inspection the recycled plastic disc isn’t flimsy – but being recycled, the plastic material will relax over time, meaning that it will not fit tightly if used a second time. So it is designed to be used only once in transport, then it can enjoy a second life as a drip tray or coaster.

keep the bottom tray in place so when you pop the paint lid, it will keep the surface free of accidental paint drips! Use the top disc as a coaster for the opened paint lid.

b) Will the trays come off easily? It doesn’t look like it would stay put under duress?

A disc is highly unlikely to work its way off whilst in the box. Jop untwisted the disk to show me a series of clips that grip tenaciously to the rim of their paint tins.

c) What else is in store with this tray design?

The design has options. Like all great ideas, it can be developed in many different ways. Putting himself in the shoes of the painters and couriers, Jop says he has seen a way to integrate a couple of special tabs that will enable two cans to be clipped together, making for even more solid stacking. (He has confirmed that this is already under construction.)

No doubt there will be more adjustments as the Dutch design master from the Delft school delves ever deeper into the details, drawing on his extensive experience.

What paint cans will this system work with?

At this time the paint transporter discs are compatible with standard can sizes. It is worth seeking advice from Hildering about which cans perform best when it comes to lid closure and crash impact. They know a thing or two about this subject, as they are THE paint can suppliers for many of Europe’s large and small paint companies, and it is highly likely you have handled a Hildering paint tin at some point. 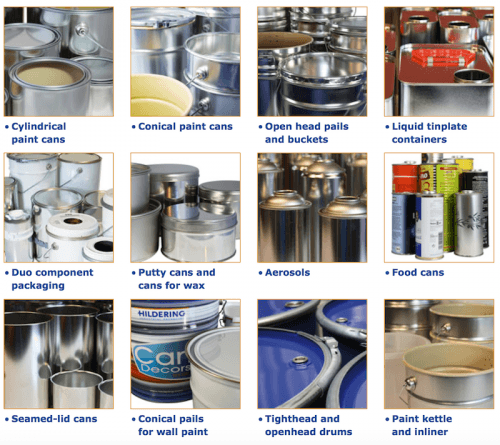 Thoughts on the potential all-round savings

Every professional painter has probably experienced that sinking feeling, opening a cardboard box full of paint. It is a surprisingly expensive feeling too – the cost of a day’s lost labour waiting for a replacement tin far outweighs the cost of the material. Eradicate that overhead in the trade and suppliers should win new friends for life.

Every online paint merchant would surely benefit from lower packaging costs and significant time-savings, reflecting in some cost benefits for all involved? When we receive a one litre can in the middle of a box the size of a small refrigerator, it doesn’t exactly represent efficient use of resources nor thought to the environment, and still some couriers manage to kick 7 shades of paint out of these “safe, well-packaged” paint cans.

The world will be much better off with less bubble wrap and poly balls, albeit less entertained.

When paint cans have been topped and tailed with Hildering’s trays for paint transport, if they are ever dropped or poorly handled, the only big dent you are likely to experience is in the cost of the second P in P&P.

By the way, here you can watch a video of the Trays: 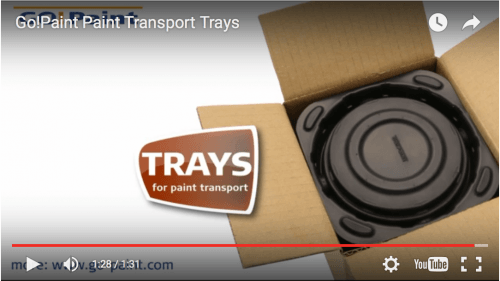 When the design team at Europe’s leading paint can supplier develops a product all about paint cans, and offers a solution to a problem everyone on both sides of the fence should be able to identify with, it makes sense to take a closer look.

If this is of interest to paint suppliers, you can contact Hildering direct from their Trade Corner page. And if you have paint delivered by courier, ask them to take a look too.