Highlights of the 2010 Painting and Decorating Show

I am looking forward to the 2011 National Painting and Decorating Show in Coventry next week, and a few memories of last year’s show have come flooding back. 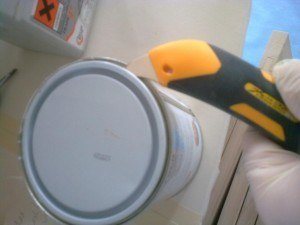 I remember one of the first stands in the arena was mobbed with all these gadget-hungry decorators swarming over fancy yellow cutting knives. I didn’t join the hordes, and didn’t really register what the company was all about.

A few months went by before I bought an Olfa knife. There are loads of different reference numbers and options in their catalog, all quite confusing, I found, so I went for something obvious – the “sharks fin”. It was christened this by super decorator, Wayne de Wet. My reticence at the show cost me a few months of super knife usage! I don’t know what I would do now without such a sharp utility knife.

Another stand that had the crowds swarming was Graco’s, where they were demoing the cordless ProShot airless gun. Luckily I had checked one out beforehand on Jack Pauhl’s site and he had highlighted the pros and cons of a Pro Shot in great detail. I thank him for that because as I was listening to the enthusiastic spiel from the gun-toting rep, I realised that he was only telling me about the pros of the tool.

It is no doubt a good piece of kit, but overlooking the £500 of depreciating sterling for a gun that can only be repacked once before being thrown away was a bit disingenuous from the Graco people. So I went away and did my own research and on small jobs of half a litre or less per blast, I have been happily using a top-of-the-range Sata HVLP gun with a compressor. Different approach, but not something I will need to buy again – and again. Eco pah! 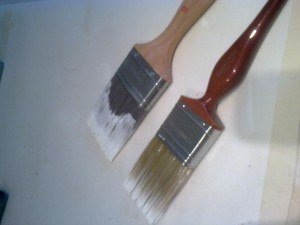 The most memorable episode was talking to the Hamilton UK sales manager. I didn’t really expect to be insulted by a salesman, but there you go. In an attempt to build bridges, I took a box of 5 brushes with the complementary filling knife (which was actually the only thing that I wanted – and was happy to pay for).

En route to the Wooster stand, I recall thinking – at £20 for 5 brushes and 2 knives (each worth a tenner), their brushes can’t be as good as they used to be. One year on, I have used the Hamilton Perfection S once. I think I threw it away after reviewing it. I used a 1.5″ Perfection a few months ago, to apply wood hardener. Maybe they got their royal crest for complacency?

The Wooster stand really encapsulated what us decorators yearn for – fantastic innovative genuinely useful and game-changing products. Their competitors need to stop talking about their super telescopic roller poles, unless they have a quick release mechanism that improves on Wooster’s design. Competitors shouldn’t flatter to deceive with super varnished handles. We want great brushes, not fancified tired designs with bristles that splay in contact with humid air or perform like tar brushes. That stand was the business. 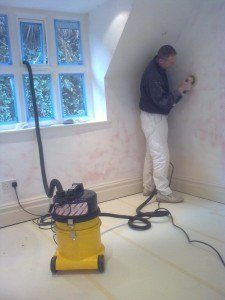 Another game-changer at last year’s show was the Mirka abranet and CEROS “dust-free” sanding combination. I have written about it almost as many times as I have used it, but I never tire of gassing on and on about the whole sanding concept. It just opens so many doors of opportunity. From buffing up wax in double-quick time, to ripping down varnished table tops in minutes, to perfectly sanded walls that feel like blotting paper.

All I want from Mirka at this year’s show is a square format version of the 5″ diameter sander. Please?

The most entertaining person at last year’s show was Dominic Taffe on the Classidur stand. Could have chatted with him all day. What he doesn’t know about his products isn’t worth knowing, and he was funny as hell.

On restoration work, the Universal primer is everything and more that you ever want from a water-based low VOC low odour problem-solving primer that has enough body to also double as a good undercoat on woodwork. It doesn’t cope with chalky or limewashed paint, but that’s where you would use the Classidur wall finish paints instead. 2 coats, job done!

I was looking forward to TDS displaying at the show. I could have just hung out there all day chatting with the crew, and tried out examples of their standard product line. Instead, I will have to wander round the whole arena looking at what TDS offer day in, day out! Not that I mind hanging out with Mythic, Krudkutter, Toupret…

I will definitely be going on the Wednesday, and hopefully Tuesday too. See you there.