Preparation is the most important aspect of decorating and the Handy by Mirka is a great solution for demanding trade professionals, DIY and homeowners, who want to see lots of filling and sanding, but don’t want their house and their lungs coated in dust. Mirka Handy, Abranet, CEROS, dust-free sanding… I think it is fair to say that Mirka deliver, hence why they are TP recommended suppliers.

Mirka, and Hallmark-Fraulo have put up an ongoing special offer on the Handy, exclusive to subscribers of the TP Newsletter. Definitely worth checking out.

For the past 2 or 3 years, I have been happy to bang on and on and on about the wonders of the Abranet system from a user point of view. Wayne de Wet has been involved with Mirka even longer, and was actively involved in fine-tuning Mirka’s Handy sanding kit.

Taking it one step further, Mirka (UK) now also have a dedicated area on Traditional Painter where you can read independent reviews on Mirka products, see videos, read their take on their 3 favourite Mirka decorating products, leave comments that their HQ will read. You can also ask questions direct on the Traditional Painter Abrasives forum and the specialists, including Wayne, will help explain or advise.

Mirka sanders, be they manual or mechanical come with interface pads which protect the sanders’ velcro base. So you add the interface pad, then attach your Abranet abrasive. They come in different thicknesses too, thin for basic sanding, and extra padded that give you some versatility for profiles and polishing. There has been a bit of “noise” about the lack of interface pad for the Handy.

Is this what has been missing? 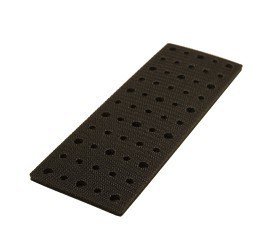