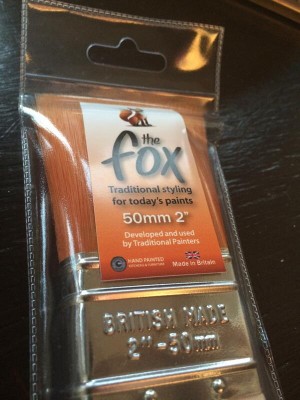 The Fox paintbrush from MyPaintBrush is Developed and Used by Traditional Painters.

This is a run down on how to get the best out of the British made paintbrush, with insights from the developer, Martin Guest, and Fox fan, Jack Pauhl, plus some background on how this super brush, made in Britain, came about.

Whether you are a demanding professional painter or a keen DIY, this brush range should prove of great interest to you.

Preparing to use a Fox paintbrush

As with all synthetic brushes, every time you use them in water-based paint, make sure the bristles are pre-soaked and then flicked out (don’t let water drain down below the ferrule). This dampening will help with cleaning and paint loading.

Then make sure you thoroughly load the brush with paint to just above the ferrule. (You don’t have to load it down this far at the start, but it will naturally be full, like this, after some use.) 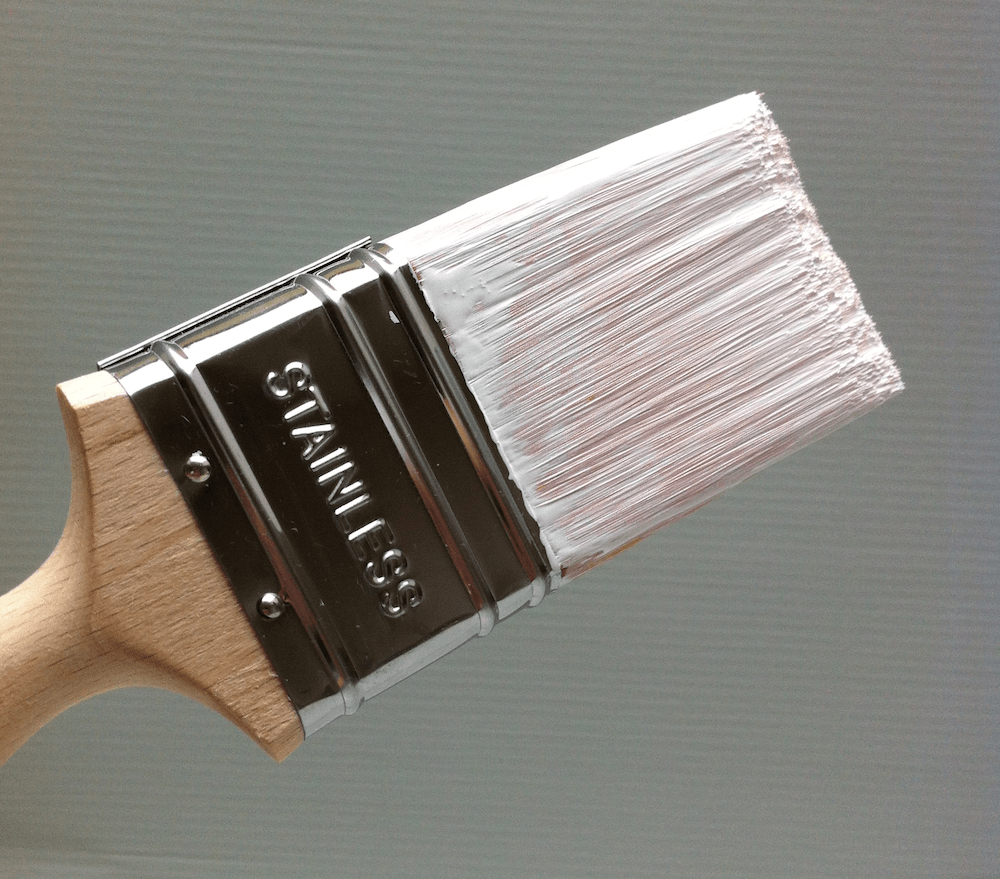 You see so many videos on Youtube where a brush has only been dunked half way down a couple of times, and then an expert opinion is formed on the basis of using a brush that is literally hobbled by insufficient paint.

There may be a loose bristle or two poking out the top after the first dampening stage, or in early use, which is normal. Just pull them clear. 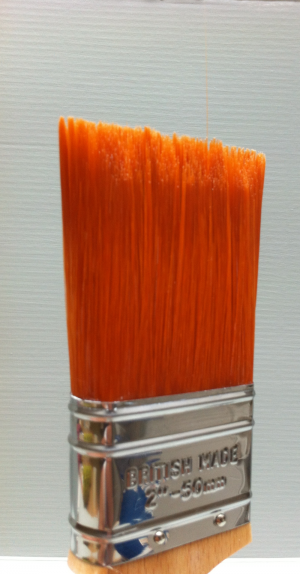 (If you have a rare brush that seems to shed more than you would expect, please let MypaintBrush know, so they can replace it and you can return it.)

The production process is very stringently controlled, literally every brush is checked, and a shedding brush is definitely the exception, not the rule.

In fact any brush you buy from a good manufacturer could be one of those exceptions. So a few too many shedding bristles isn’t great, but in the Fox’ case, it doesn’t mean the whole range is bad, just the particular brush you have!

At Traditional Painter, we have a lot of inside knowledge about the brush and its capabilities, and we know how good this brush is, but nobody at Mypaintbrush or Traditional Painter has publicly pitched the Fox as the greatest brush of all time. That isn’t actually for us to say!

You should take a look through the views of 3rd party painters. There are plenty of reviews on the MypaintBrush site from their customers who have taken it at face value as a synthetic orange bristled paint brush, and worked with it.

What we will do though, is repeat what the Fox developer Martin Guest has said –

the Fox paintbrush is a really good work horse that meets Traditional Painter’s high standards in most paints!

How good is the Fox brush in wall paint?

Jack Pauhl in the USA knows a thing or two about brushes. He is renowned for his dead straight and well reasoned opinions on brushes, and had no reason to judge the Fox brush favourably.

He had a good run out with the 2.5″ Fox in wall paints. His reaction was:

I had the opportunity to spend a lot of time with the 2.5″ Fox brush and I can say with certainty the brush is not only capable of laying down nice solid cuts, but it can do it in record breaking time, accurately.

The Fox blew away our previous benchmarks recorded with the Picasso on long straight runs. The Fox Brush Developed & used by Traditional Painters

For some perspective, the Picasso brush is viewed as the best brush for cutting in emulsion paint by many painters in the USA and UK. It seems to be Jack Pauhl’s favourite brush.

His feedback is therefore a huge vindication of the “work horse” tag, because…

Traditional Painters spend a lot of time on kitchens and furniture and tend to focus on achieving flawless finishes on woodwork, which the Fox delivers beautifully in water based and oil paint. It is used on many kitchens now.

We are moving ahead with water-borne finishes, but even in many types of oil paint, it performs well. Martin has, for instance, had the Fox working 6 weeks straight in oil-based satinwood on a job for a very demanding client. It also gives a super finish, when fully loaded and working as intended, in Little Greene oil eggshell paint, which is known for being a little sticky.

Where to buy and which straight cut Fox to pick?

The whole Fox range of straight cut, sash, laying off brushes and fitches is available online exclusively from MypaintBrush.

* 1.5″ Fox will serve you well for oil or water based trim paint. Holds a huge amount of paint.

* 2″ Fox is the most popular. In emulsion though, go bigger, you won’t regret it.

* 2.5″ Fox is the sweet spot star for emulsioning. Leaves arguably the current best brush in the dust for cutting in long straight lines. (If your wall paint is cheap and nasty or not flowing nicely, the Fox can’t perform miracles, though!)

3″ Fox is great for painting texture finishes. Holds too much paint for normal interior emulsioning!

* 1″ Fox is a straightforward conventional 1″ brush with its normal uses. After use in shellac primer, though, it will do you particularly proud, sitting in your shed in meths for 3 months and be OK to use again in Zinsser BIN.

A flat ended round sash brush is a smart choice for painting spindles.

Ideal for mouldings on doors too!

Even the angled fitch has surprised a homeowner using it in chalk paint.

It is overall a super range of brushes for professionals and keen DIY.

Some background to the Fox

The Fox range was commissioned and trademarked by MyPaintBrush, and has been developed by Traditional Painter Martin Guest who worked closely with the brushmakers. With input and feedback behind the scenes, Martin has basically used it on all his kitchen and furniture painting work, trialed and tested and presented the world with a Fox brush that addresses (and answers) several issues that other brushes suffer with.

Shoddy ferrules – these really get on Martin’s nerves and so the ferrules on a Fox will always be very well finished. It is a shot across the bows to the many manufacturers who don’t seem to pay much attention to the fact that fingers and hands don’t do well in close proximity to jagged metal edges. Poor aesthetics aside, an ill-fitting ferrule reflects a rush in the production process.

Paint holding capacity – Because of the bristle blend and design, the paint holding capacity of the Fox brushes is huge. Remarkably, at the same time, it has been finished at the tips to lay off with minimal brushmarks, and keep a straight line. Some pointers on the Fox sash brush.

Not a Picasso paint brush – The Fox is orange but it is not a Picasso and for several reasons, will wear better than the classic orange top.

Works in most paints – The bristle choice and design makes it very adaptable too – a Fox excels in many many paint types.

Of course the full Fox range is far from finished,

but great plans lie ahead. There are always modifications that can and will be done, but bottom line:

The Fox has been designed to meet the needs of UK painters, both professional and DIY, who have to get a great finish in modern paints.

The Fox is very adaptable and cuts down the need for a different brush for each paint type you use!

We know how ground-breaking these brushes are – technically, they are miles ahead of any brush on the market, (even the Picasso) – but we will just say, the Fox is Developed and Used by Traditional Painters, it’s a great work-horse, they are used on priming and finishing beautiful Traditional Painter kitchens, and high end decorating work, and all users are invited to leave their reviews for others to read.

The Fox brushes are UK made, exclusive to MyPaintBrush, and the prices reflect the local production.

They are available singly or in * bundles online from MypaintBrush, and select decorator merchants in Scotland, with more merchants to follow.

No single paintbrush has all the answers, and there will be knockers who don’t like the handle or prefer a thinner stock etc, but this isn’t one to give up on.

If you hit a hurdle, let us know, and also persevere! This brush is a super advance in decorating that will help you improve the standard and speed of your work.