Farrow and Ball exposed – the real deal or smoke and mirrors?

Farrow and Ball are a small player in a huge paint and wallpaper market, but in terms of profile, they punch way above their weight. Is the Dorset based company the real deal or smoke and mirrors?

I was fortunate to be invited for a look around the Farrow and Ball factory, along with a dozen or so other decorators and suppliers. We met the paint and wallpaper makers, colourists and chemists and chatted with the marketers, sales and production teams. 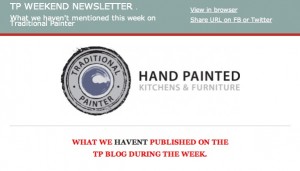 I don’t repeat the weekend newsletter information in the blog, because it is prepared for subscribers only, but I think anyone with an interest in British paint and Farrow and Ball will enjoy popping over to read the article about the day.

The link is further down this page.

Whatever your stance now, it should change after reading the article, because I doubt many readers have much of a clue about what Farrow and Ball are like behind the scenes in 2014. I certainly didn’t.

For instance, did you know they work out of a series of glorified sheds, they name some of their colours in honour of staff members; they have a painted elephant in their main office; every drop of paint and wallpaper worldwide comes from down in Wimborne, Dorset, and they provide their trade guests with super sandwiches.

Keeping the metaphors going, for those of us on the outside, F&B are like marmite. They seem to lead the world in paint colours, but the names of Farrow and Ball colours either raise smiles or provoke howls of derision from the stalls – What’s next, Vintage Bats Pee, Hungry Hippo Spit…?

Their paint is adored by followers of old fashion and loathed by decorators in search of modern scrubbable matt paint;

their customer support is a big bone of contention in the trade, (Traditional painter has a bit to say about that here)

and they are known for doing no wrong, being arrogant and a bit too demanding on their independent stockists, but any decorating business leveraging the F&B look can enjoy a profitable ride off the back of the company.

We were shown quite a bit behind-the-scenes and did emerge with a clearer picture of what F&B are about.

They looked after us, much appreciated, and unlike some corporate bods, absolutely not a single word was uttered asking us to reciprocate by writing favourably about them, so hats off for that.

If you have already read the article

What do you think of F&B, especially their approach to dealing with tradesmen?

Do retail customers have it all their own way?

Have you used Farrow and Ball Estate Emulsion in the wrong place, ie in a hallway or kitchen or playroom, where a non wipeable chalky finish is clearly not up to the rigours of modern high traffic living – and blamed F&B for its “shortcomings”…?

One comment to “Farrow and Ball exposed – the real deal or smoke and mirrors?”