As far as I am concerned, quality comes before quantity and speed.

However, if you can program yourself to work as efficiently as possible, while maintaining the highest standards, you have arrived!

If you take a long hard look at everything you do and all the kit you use, you begin to see room for improvements. The full story behind (efficient decorating)

Dusting brushes are a waste of time and money

For serious bang for your buck, throw away your dusting brush! 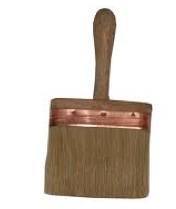 The trusty dusting brush (or jamb duster as I was told to call it), what a total waste of life, pushing dust from the window frame to the cill, then on to the floor. Then where?

Ever see the groundsmen blowing leaves from point A to point B, and thought what a complete waste of time and money? The blower may be 50HP of pure blower technology operated by the fastest blow operator in christendom, but who are they kidding – the following day the leaves will have drifted from point B back to point A.

Point being, someone had to pay for that wasted effort to get no further forward. Likewise with a dusting brush, a complete labour hog that achieves very little, very inefficiently.

I don’t own a dusting brush, they are banned from my sites. It is cheaper, faster and cleaner to provide a Henry vacuum and a duster brush attachment for collecting the dust created during sanding. (I use vacuum extraction for sanding tasks, but you have to do fiddly mouldings by hand.)

But, a dusting brush is much cheaper than a Henry

A new Henry costs £100 there or thereabouts. It doesn’t take too many hours of saved labour costs to recoup the initial outlay, and the vacuum can last several years thereafter. Replacement brush heads from Numatic cost £4.

In comparison, a £20 super hog hair dusting brush is the most expensive brush in a painter’s tool kit – and in terms of lost labour costs, it gets more expensive every time it is used.

(As an idea, much traditional kit and materials such as white spirit, dust sheets, that have long been taken for granted should be binned, or at least put in a dark cupboard and only brought out on special occasions…. )

One comment to “Efficient painting and decorating – no dusting brushes please”