This review of the Eco Ezee recycled paint kettle and tray was written in August 2011 and been on the backburner. How accurate was it? Does it stack up 2 years on? I asked Simon Verrall, our blogging apprentice! to comment, as he uses both items regularly. Also to finish, I dug up that old chestnut, the Eco Ezee brush.

At one of the many decorating trade shows organised by the former TDS back in 2011, I was asked by Eco Ezee to review some of their recycled painting sundries. Namely a recycled 9″ paint tray and a 2.5 litre paint kettle.

Eco Ezee strives to replace, where feasible, consumer products that continue to deplete the world’s natural resources, such as those made from plastic, metal and wood; in doing so we endeavour to make all goods compostable, biodegradable, reusable and recyclable.

I have to admit I was very skeptical from the outset. Did these recycled products have a place in my decorating world, especially when I compared the pressed cardboard creations to the design and build quality of Wooster sundries. Wooster sundries are made of plastic derivatives that would almost certainly last a working lifetime if well cared for. You would probably need to run over a Wooster Big Ben tray with a truck before it was useless enough to be thrown in a tip. But Eco Ezee were adamant their kit works, so I tried it out.

I try to be scrupulously fair, I know what its like to design and make products that consume every ounce of your being. On the plus side, the Eco Ezee recycled paint kettle, yes, I liked it very much and recommend it.

I’ve always used the kettles. It was Paul that got me onto them. I love that I don’t have to worry about cleaning them up, and putting more paint down the sink like I would with a plastic kettle. like you say – When empty, just wipe out excess and allow to dry, ready for the next use. Brilliant!

I also, again a tip I got from Paul, I always give my brand new Eco kettles and trays a couple of coats of something before using them. Just to ‘seal’ them in a little bit more. You can feel the difference if you don’t, and you just pour the paint in.

This I liked a lot. 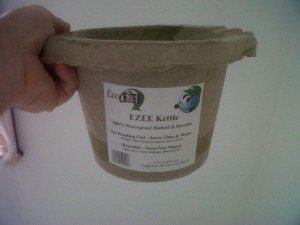 If you are using a brush for painting interior woodwork or cutting in emulsion paint, while working off the floor or on a small step up, (ie not dangling off ladders) this Eco Ezee kettle I think is the bees knees – as it actually addresses that major usability issue with most paint kettles – the handle.

I have a bee in my bonnet about standard paint kettles – the handles are a major design flaw for painters in a hurry. There is too much to think about when loading your brush and trying to avoid the dangly handle. 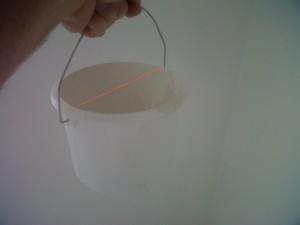 The available dipping area of conventional-handled kettles is at best half the surface area of the EcoEzee kettle in normal stand alone use. That is a lot of lost space when working full tilt, trying to guide your brush into the kettle / can. If you don’t concentrate, you end up with paint all over your fingers as you miss the mark. A conventional kettle / bucket / pail is the industry standard, but that doesn’t make it good.

(You can hold the metal handle out the way with an arcane grip, but it’s not great, especially if you have a fair bit of weighty paint in the kettle.) I love the Wooster Pelican, apart from the handle, especially when up a ladder. And so it goes on… Anyway, 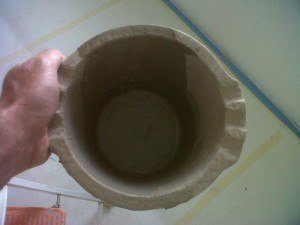 Being able to hold a kettle without a conventional handle getting in the way is a really big deal.

It is pretty well made too. Can’t say how long it will take to break in normal use, I would only ever have a couple of inches of paint in a kettle, ie no weight as such, but it doesn’t feel pathetically flimsy like the tray and it doesn’t need to be handled with kid painter’s gloves. (Build quality is not an issue after a couple of years, to be honest, it is tough enough for normal use.)

They say it doubles as a liner for plastic kettles, fair enough, a good eco idea that avoids any flaky paint syndrome with standard vinyl and contract matt paint.

They wipe out fine after use. A 1 litre format would be very useful too.

So almost no reasons against, and I would definitely recommend having some of these 99p recycled Eco Ezee paint kettles on hand.

Quite often I’ll use the kettles within a plastic kettle too, especially if working up a ladder as I can hook them onto the Ladder Limb. Also that helps protect the wall of the Eco kettle, as if you’re using a good amount in it, you wouldn’t want to bash it. I’ve used them for holding a lot of paint and they’ve always been ok. I always use a brush peg with them too. Either the Axus or paintbrush peg.

It’s hard not to deteriorate into a cynical satirical rant about this tray, but here goes. It is with a heavy heart that I have to say that the award winning tray, for me, was a complete waste of time and material, and the prize winning rosettes were wasted. (Simon had better luck!)

Bad start, as I broke one just trying to remove it from the stack of 4 I was given to trial.

It then went from bad to worse when I got to using tray number 2 with a 9″ Wooster Sherlock roller on a pole. (I am absolutely not into 9″ rollers for painting wall and ceiling areas, but I had a couple of small sections to paint, so I gingerly tried it out.)

To be fair, I am not a heavy handed user, more Jenson Button than Lewis Hamilton? 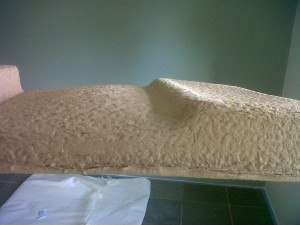 The tray lasted a few minutes before it started to deform and become useless for rolling walls in tandem with a pole. 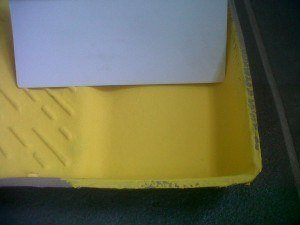 Nothing worse for a painter in a hurry than to see your tray’s paint reservoir physically shrink with use before your eyes. I then had literally a mind-boggling sinking feeling as the rolling off area buckled down in the middle (sogginess striking?) so the roller would only pick up paint on the edges.

And of course, applying more pressure to try and actually pick up more paint across the full width of the roller just caused the tray to buckle even more.

On the plus side, during rolling, it didn’t melt before my eyes.

The trays are something I’m 50/50 on. Again, great for the clean up, but yes.. they do warp and can easily bend and break. If I use them, I’ll use two… the one I’m using, and another to put that into for extra ridgity. I generally use the Sherlock 9″ frame and sleeves on the GT pole.

In the new year I think I’ll be looking into a Wooster tray with liners. I’ve got a 14″ Wooster frame and the big ben to use. So want something to accommodate those.

This is the full Wooster Sherlock system to work towards.

Conclusion
After use, you can just clean out the paint from the kettles and trays, and the residue dries off ready for use the next day.

On the downside, the tray may not reach the next day! In this current format, any sort of semi robust use is beyond its capabilities, and the eco story falls apart as good use of recycled cardboard. I have a couple knocking around with my rolling kit, they haven’t broken, but I am being especially careful with them. I’m sure most decorators’ vans would be a near instant graveyard.

I would say that for rolling paint with a delicate 4 or 6″ inch mini roller, its construction is more acceptable, but still, with it deforming so readily, efficient laoding is a distant hope. Also because it is so flimsy, the tray would have to be on the floor or work surface right next to you, not in your hand. It would bend and break in no time unless literally cradled in your arms. So not really a substitute for plastic or metal mini roller trays or the Pelican.

So I would have to advise any painter to avoid this £1.50 tray and do something else for the environment.

They have a good eco angle, because, with the exception of zero consumption, recycling is the most realistic way to save big time on resources, and based on personal extended use of their kettle, they should be able to sell that to the trade, but the tray is a tricky one to save the decorating world with, as there are many 9″ trays that just work.

Eco Ezee do a range of products, including eco brushes with bamboo handles. 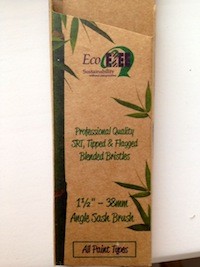 Talking about these brushes in 2011 brought me quite a bit of grief. I dared express an opinion that contradicted a mainstream review stating that they were among the best new brushes on the market in 5 years. Bamboo, recycled, SRT, whatever, compared to any number of US brushes appearing on the market at that time, they were mediocre.

The most upbeat review I can get in 2013 after 2 more years of development was from Martin Guest. For some perspective, when he really rates a brush, Martin does not talk cautiously, or use terms like OK, quite, a little and throwaway! And some other opinions were not printable.

As an idea, the Purdy Nylox uses an SRT flagged and tipped duPont bristle and that is rated in the USA as one of the better interior painters’ brushes. I just think Eco Ezee brush makers have a way to go for a serious finishing brush. There are so many really top performers to choose from. (And I don’t subscribe to the idea that if a brush is not a big hit with the trade, it should be palmed off on the DIY market.)

But they do have a niche use in other departments and are of some interest to kitchen painters.

…for using in Zinsser Bin, left in a pot of meths when not in use. The bristles stay firm

Got one last year I think. Same here… used it in B-I-N for a while then binned it… It doesn’t stick in the memory… If I had liked it, I would still be using them.

If you have any Eco Ezee info to add, be my guest in the comments.