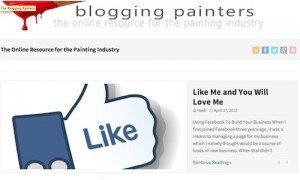 Since 2011, I have been perusing Blogging Painters an outstanding N American resource for painters, suppliers and homeowners with an interest in the painting trade.

It is a very positive and deeply informative read, picking a positive path between the fight clubs that are some trade forums, and staid academia, where you just want to hang yourself on the minutiae.

BP – an agent of change?

Blogging Painters has evolved, the contributors have evolved and to me it looks like there is a growing belief in what can be achieved as a group pushing for excellence. By pooling resources, and being smart about it, co-operating, not dividing, they really can raise the bar in the universally scatty profession that is painting.

The Blogging Painters go into web design and health and safety and new product tests and myth-busting and design, colour, business philosophy. A well rounded bunch with food for thought aplenty.

What can American painters teach UK decorators and DIY enthusiasts?

If you are like me, a great believer in the maxim of the “US sneezes Europe catches a cold” Blogging Painters is gold dust, as far as insights into what may be coming to the market from over the ocean. At the very least it gives a different perspective on how things are done.

TP is a different website animal to BP, but we have a good online rapport with the Blogging Painters, picking up on ideas, tweeting, respecting our differences – dictionaries to hand!

We say emulsion, they say latex; they say trim, we say woodwork … actually, the boundaries are blurring as we slip effortlessly between one language to another.

Many paint products either side of the pond will probably stay a mystery, with a couple of exceptions like Benjamin Moore who learnt to swim to the UK and Farrow and Ball and Annie Sloan hit the states.

On the plus side, Proform, Corona, Wooster and Purdy, Graco, 3M have product everywhere, but for some reason, Fine Paints of Europe are in the USA but haven’t graced the UK? Never understood that.

Anyway, there is no debate where you can touch on one of the main pulses of painting in North America – wherever you are in the world, head over to Blogging Painters, there will be plenty to get stuck into.