In the painting world, talk of best paint brushes in the UK gravitates towards 2 names – Wooster, who make dozens of models including the Alpha, FTP and Silver Tip, and of late, Wyoming-based Proform, whose Picasso brush has become the benchmark for performance and painting straight lines in water based paint.

Is the Wooster Alpha the best brush for most jobs?

Is it over rated? Here’s the rub. In the US it is still highly rated, even with the Picasso stealing the show. In the UK it seems to have fallen out of favour.

This huge transatlantic division of opinion about the Alpha, arguably the best hand crafted brush still available, highlights a couple of the difficulties UK painters are faced with picking the best American synthetic paint brush.

Paint maketh the brush
In the demo below, Jack Pauhl is using an Alpha in acrylic latex wall paint.

He now rates the Picasso first for cutting in wall paint. Does that make the Alpha a bad brush, or over rated? The Alpha was a top brush in Aug 2010 according to forum chat. In the US it is still a favoured brush. In the UK, painters would be hard pushed to jump on the steps and reproduce that piece of skill using a Wooster Alpha brush in everyday vinyl matt emulsion. Consequently it has become mostly overlooked for the job it still does really well in its native US acrylic latex environment, which is a shame.

I don’t use the Alpha much either in water based paint (still use it if rolling and laying off oil based eggshell though) , so this isn’t a plea to get it back out the box, but in general it highlights a couple of things UK painters have to get their head around when thinking about best American brushes for the job.

a) The best paint brush doesn’t exist, and just because a brush doesn’t do all things brilliantly, doesn’t make it a bad brush. The Picasso is pretty poor in oil based eggshell. It struggles like crazy in chalk paint, but it is top of the list for emulsioning and waterbase finish paint on windows especially. The Wooster Alpha struggles with vinyl matt emulsioning, does the sort of work that the video demo shows in acrylic latex paint, and load it up with acrylic varnish, it is absolutely outstanding. 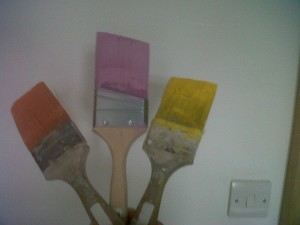 This specialisation and extra thinking about brush selection is tricky now, but it should ultimately work out well in terms of improved quality and speed! Honest. Just think of the progress made since Wooster opened eyes to a different roller sleeve for different surfaces and different paints, with rollers of different sizes in different size and style of trays… Once you have worked it out, there is no going back to the mediocre days.

And although we have known for the longest time that no single brush has ever been good at everything, there has been a (unrealistic) hope that the latest generation of brushes might crack the nut and give us one brush that fits all situations. The Picasso is fantastic all round, but to be truthful, it is not the one and only brush a top professional should carry. And at the other end, I wouldn’t dismiss any brush till it has proven to be no good at anything! I have a Wooster Exquisite, and finally found a use for it, in styptic knotting. And at a push, even a Hamilton Perfection could do a job as a dusting brush for guttering.

b) The American-made brushes are made for American paints, which shouldn’t be a problem for us Brits matching brushes to our paint, because after all, paint is paint is paint isn’t it? Well, sadly no, and this adds to the difficulty, because unlike the American scene where brushes have been developed in tandem with paint available there, and tested to death in lab conditions and in the field by the likes of Jack Pauhl, here we are having to almost start from scratch, matching brushes to Johnstones this, to Dulux that, to Little Greene the other paint.

And for some reason, brush recommendation is done in a rather non-scientific way, making it tricky to try and identify which of these fantastic brushes actually works with our paint.

eg you often see or hear, “Picasso is great, Alpha is OK, Silver Tip is brilliant for the money.” I try not to fall into that trap too, but it is all to easy to do when you don’t want to sound too geeky. But with no reference to the paint it was used in, on what surface, and were the brushes even loaded properly, it can be a minefield trying to make a fair and direct comparison between brushes.

Help identifying the best brush for different paints in UK

The ultimate aim is to produce a reference table of brush v paint. The painters on the excellent forum Painters Pit Stop are compiling a good deal of feedback. And I will be asking the network of specialist painters I am involved with for their input too. But a definitive listing is a way off still.

However, if it helps, after going round the block looking for what works for me, here is a link to my current brush selection for the paints I use day-in day-out from: Little Greene, Mythic, Annie Sloan, plus primers from Zinsser, Blackfriar/Classidur and Dulux. I now feel pretty comfortable that the brushes mentioned meet my needs for quality and speed.

Paint contractors favouring other brands of paint will hopefully go through the same process and we can make some UK sense of the whole best brush syndrome.