This beautiful hand painted kitchen in Suffolk was custom-made walnut. It was remodeled by a joiner and re-painted by Richard Willott, Traditional Painter member covering East Anglia.

The kitchen is located in Woodbridge on the River Deben. There is a famous boatyard there, near the famous Anglo-Saxon Sutton Hoo burial ship. The Romans, the Germans, Boadicca and the Angles all passed through the settlement and left their mark. Richard followed suit!

This kitchen started as a mix of walnut and painted cerise. 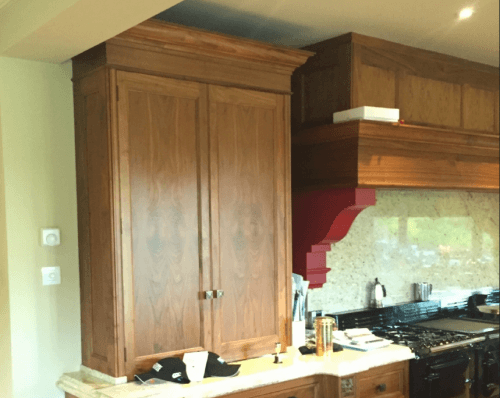 Several wall units were moved around and the curved cerise-painted island was to be remodelled. 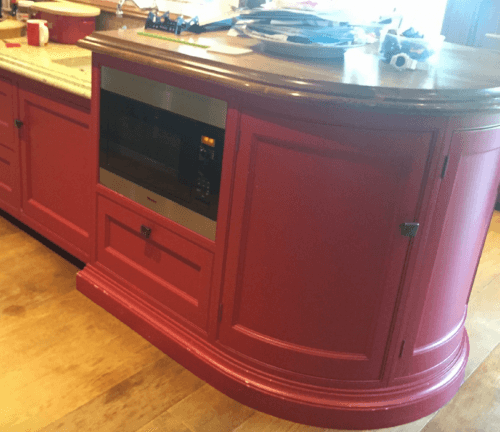 After extensive joinery work, Richard then took over.

The preparation and painting process is well documented in Richard’s kitchen painting articles, starting with degreasing, labelling doors and drawers, and sanding all surfaces to be painted. The clean, well-keyed surfaces are then primed to ensure maximum adhesion of subsequent finish coats.

After painstaking and meticulous fine sanding between coats and a well honed painting technique, the end results of Richard’s kitchen painting service speak for themselves. 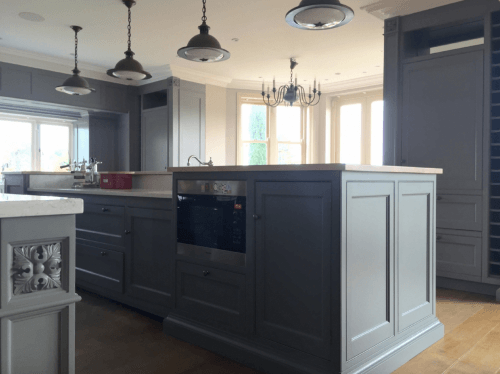 The paint was accurately tinted to an equivalent of Plummett and Downpipe, and as you can see, the island was squared off and worktops modified.

Richard can be contacted via his profile page on the Traditional Painter website, where there is a summary of his business, case studies, customer testimonials. His own website is FX Decor and as well as beautiful kitchen and furniture painting, Richard has a great portfolio of decorative paint finishes.

Richard is our Traditional Painter member covering East Anglia. He started his craft life many years ago in a boatyard and knew well of Woodbridge, which has had a centre of boatwrighting excellence since the Middle Ages. Boatwrights in the traditional sense can literally build a complete boat from scratch, with the joinery skills to construct a curved wooden hull, splice ropes, install rigging, cast an anchor, install the mechanical services. In general, if you work around boats, you become very resourceful!

Painting wooden boats is very satisfying, but not always as glamorous as it might sound. Richard would have spent many many hours sanding, repairing, priming, fine surface filling, applying repeated coats of varnish to achieve mirror like finishes…

Moving into decorating and kitchen painting, Richard was therefore no stranger to hard work, attention to detail, and a mindset to achieve the highest standards of finish on kitchen cabinets.

For wooden boats therefore, you need to assume that the sea will always win, and joints will fail, and timber planks and decking will need repairing, often at sea. Hence the beauty of linseed based fillers and screws. Contrast that to modern boats with gel coats and Sikaflex type adhesives. These chemical based products are tough and endure but when they fail, the failure often causes catastrophic structural damage that requires major surgery and a lot more than a filling knife or a screw driver to put right.

If you have a wooden boat, therefore be very alert to advice that takes no account of the potential catastrophe of sealers, fillers and fixatives that are stronger than timber.

When moving into wooden kitchens, Richard gravitated straight towards Alcro furniture paints. Alcro Aqua Servalac is a well established and proven water-based Scandinavian paint from the Tikkurila stable. Richard has stuck with his system of paint and fillers and abrasives for many years, as they work well in a kitchen environment.