A mural at Wetherspoons refurb in Rugely, Staffs

Traditional painter for Stafford, Martin Dunn, shows off his paperhanging skills in an intimate drinks venue in Rugely.

The (non) parlour painters amongst us occassionally get asked to do something a bit different, so when I was rung by a company in London last week, asking if I could hang a mural at Wetherspoons refurb in Rugely, Staffs, I was up for the challenge! 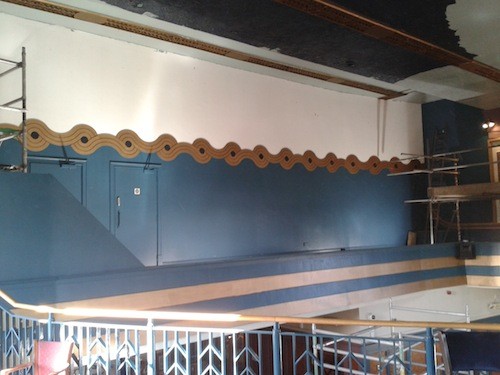 Typical commercial job! It’s running behind, badly organised and trades are falling over each other.

The “decorators” on the job didnt fancy it and there was a Thursday deadline, so we moved work around to try and help out.

The Wetherspoons in question is typical of the type of building they like to use, and this one was a 1930’s picture house converted into a pub. The mural was to be hung on the balcony and the 15 piece wallhanging was telling the story of the building from its opening to its close in 1996.

So Matt and I turned up in hi-viz jackets and boots, and waving our PASMA cards, erected the mobile tower before setting the wall out ready to go. 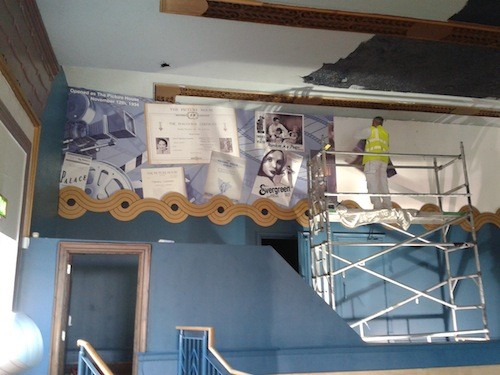 15 pieces hung in sequence, and following the plan supplied by the supplier, the job was a gud ‘un! 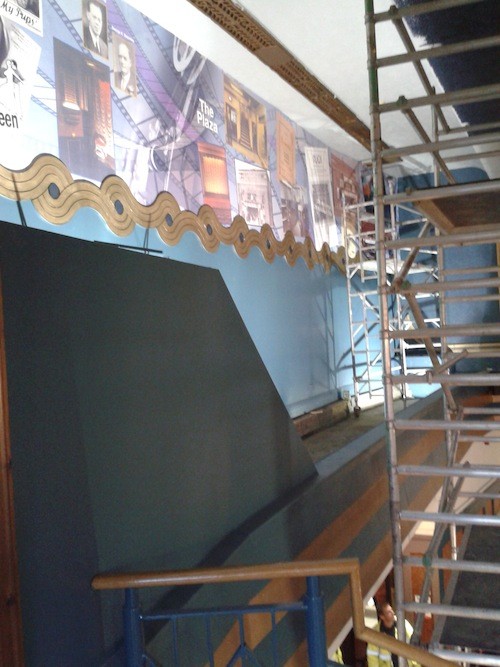 So a day’s work with a change of scenery was just what the decorating doctor ordered. Mind you, I wouldnt want to go back full time to this type of commercial work. I spent too many years chasing my tail in the past to want to do it again.

What we should have added as well was that every piece had to be cut and trimmed into that wavy design that runs along the wall. There was no gap to tuck the paper behind, so it was doing about 10 half star cuts on every drop.

Also we hear so much about new products and tools, which is fine, but sometimes you are best sticking with what you know.
As the paper was in 1 meter widths and needing pasting, we had to rig up some boards. The muraspec boys and girls amongst you will know how to do this.

We have a piece of ply that is just over a meter wide and 2 meters long. We have covered this in plastic carpet protector and some tape would do the job, to make it easier to clean down. Place this on some trestles or tables and you have a perfect paste table for wide width. Failing that just nick a piece of plasterboard from the dabbers on site!

Coming soon. Farrow and Ball part 2 – even worse than part 1

Farrow and Ball? They couldn’t give a monkeys. Now that’s what I call service!